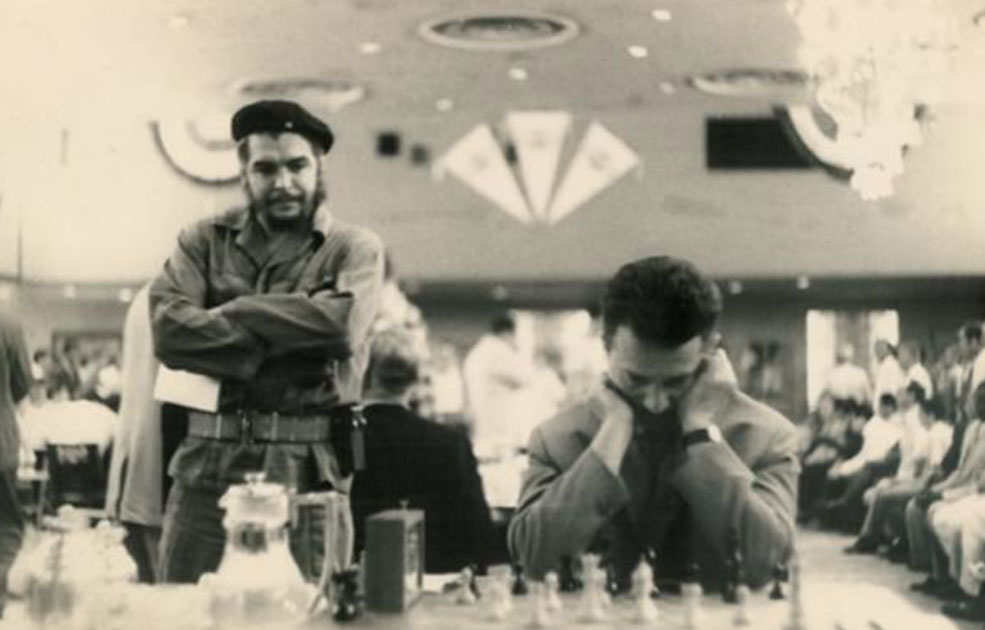 In April 1962, I was staying at the Havana Libre Hotel (before the Castro Revolution the ‘Havana Hilton’). One Friday, I returned to my hotel after work, but the guards at the main entrance would not let me in. I tried to explain that I was a guest of the hotel, but to no avail. In the midst of our somewhat heated discussion the guards snapped to attention; Che Guevara’s car had driven up behind me. He recognized me (we had met previously at the Canadian Embassy) and led me inside.

We went up to the Salon de Los Embajadores where the first ever Capablanca Memorial Chess Tournament, Latin America’s biggest annual chess meet, was in full swing. (The Cuban-born Jose Raul Capablanca, who died in 1942, is still considered to be one of the best chess players of all time.)

While we were walking, Che asked me if I was interested in chess. I told him that I played where-ever and whenever the opportunity presented itself, whereupon he challenged me to a match. I thought he was joking, but I accepted nevertheless. He then said that we couldn’t play there and then because he had come to watch (see picture) Svetozar Gligoric (the Yugoslavian Grand Master and World War Two guerilla resistance fighter) play, so our match would have to be at a later date.

I was sure he was simply blowing me off. Then he surprised me. “How about tomorrow morning?” he asked.

“Deal,” I said. It was Saturday and I wasn’t working. “Where and at what time?”

“On the terrace bar by the swimming pool at eleven”. I was taken aback; I had no idea that he was that familiar with the hotel’s layout. “You’ll buy me coffee,” he commanded and disappeared behind the Salon’s doors before I could say another word.

I fretted all night, trying to figure out whether he would show, hoping that he would.

He did – and beat me in sixteen moves in less than an hour.

The idea of creating an annual Latin American memorial chess tournament was Che Guevara’s who (very much in love with the game and a serious player) could underwrite the cost of the first such event because, at that point in time, he was the President of the National Bank of Cuba.

After the 1962 meet, held from April 20 to May 20, Havana continued to host The Memorial Capablanca in June of every year.

Next Story
A Chat with Elie Wiesel

8 Responses to :
Che and Chess