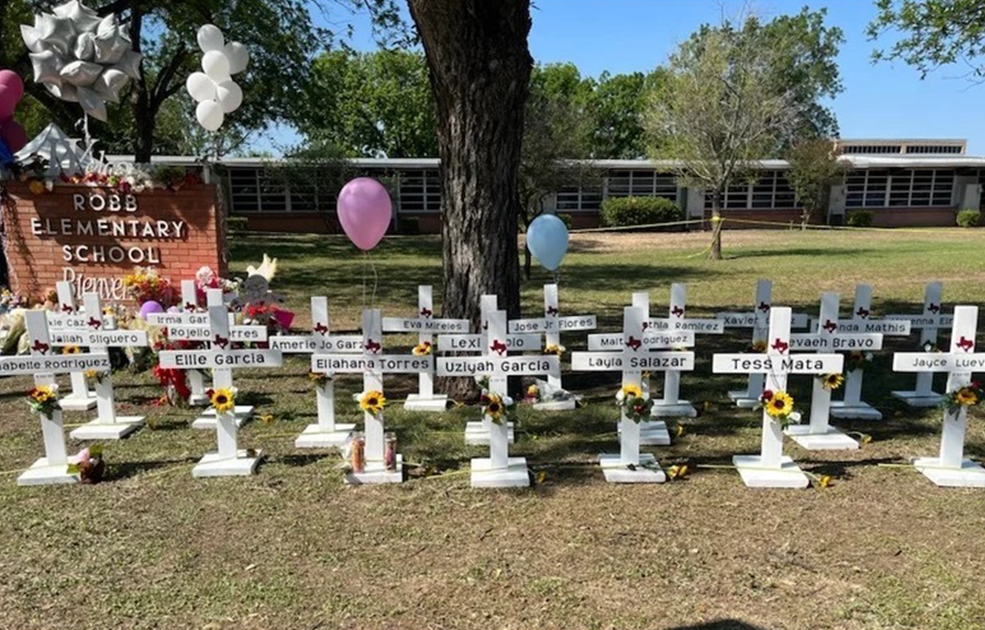 Xada felt funny. She was lying under her desk and her brother, Rafa, a year older, was lying on top of her, protecting her.

She forced herself not to look at what happened because her teacher had said that she should play possum when there is a shooting because those who pretended to be dead when there was a shooting they escaped being shot because shooters were only interested in shooting alive people and this was a real shooting.

She felt something warm and sticky running down her neck that dripped down to the floor in front of her eyes, and it was red. She wanted to touch it, but she dared not move because teacher had said Don’t move. But it didn’t really matter  anymore because she had seen teacher fall to the floor just before Xada had gotten under the desk and now teacher was lying next to her not moving. She was dead, Xada knew, because teacher was staring at her with her eyes open, not moving. ‘So she must be dead’ she whispered to herself and that was a pity because she loved her teacher.

She couldn’t help shifting her body ever so slightly.   Rafa was heavy and not moving and sliding off her so he must also be dead.. Then she felt the bullet hit her in her side The gun was firing lots of shots and suddenly she became very tired. Mama was there and took her in her arms, but her side began to hurt very much and Papa told her to be strong and that everything would be all right. And so it was because she was back at he amusement park with Papa and riding the horse on the carousel. Papa had his arms around her, whispering in her ear that she shouldn’t  worry, he won’t let her fall off the horse, and Rafa kissed her from above, but he seemed to be very far away.

HAVE YOU NO SHAME YOU COWARDLY, MURDEROUS GOP BASTARDS, SLAVES OF THE NRA?

Next Story
My Ninth Novel

5 Responses to :
In Memoriam