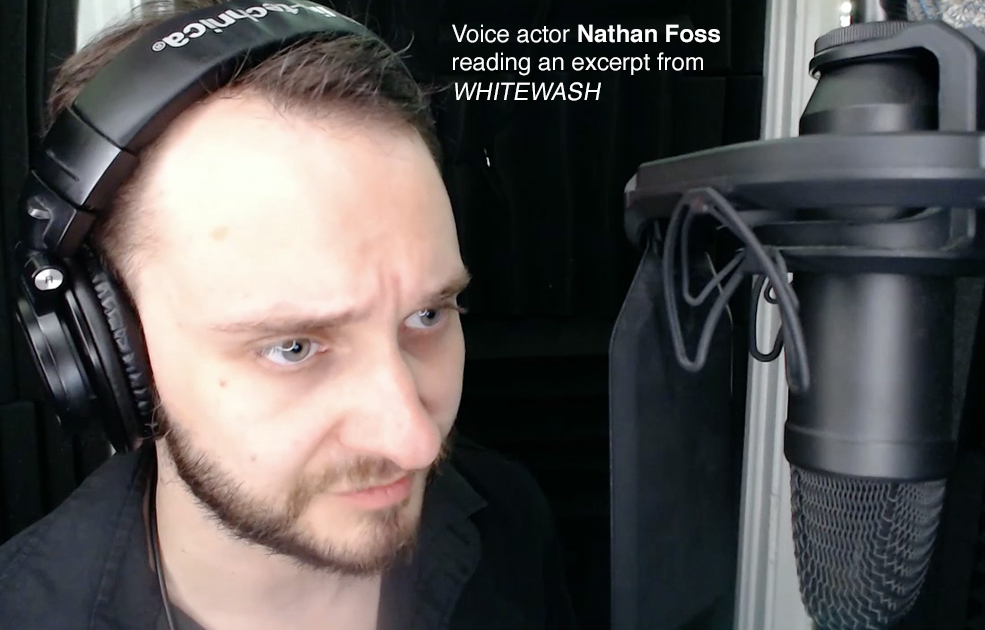 The Audible edition of WHITEWASH, my ninth novel, is scheduled to publish in the Fall. It’s about an NSA Contractor, Tom Karas, who spoke six languages, had an exceptional memory, was a dead shot, hated the Soviet system, thirsted for revenge and had been recruited by the National Security Agency’s hyper-secret ‘wet’ Section to help keep Russia’s influence to a minimum in Latin America during the 1960’s.

I thought you might like to listen, in advance of the audio-book’s publication, to Nathan Foss, my Audible book Producer, reading out loud  how Karas dealt with the terrorist Tupamaro Urban Guerrillas in Montevideo, Uruguay.

“I’m not going to die here,” he said out loud, suddenly seething with anger.

The Tupamaro came for him a few minutes before three a.m. As expected, they had a key to the room to which he was registered. Since he knew they would come, Tom left an overturned chair near the door so that it would have to be shoved aside before one could enter. The noise was to have awakened Tom should he have fallen asleep sitting in an armchair in the adjoining room.

There was no need. Tom was not asleep. He was wide awake, sitting there in his pyjama bottoms. Perhaps more awake at that moment than he had ever been in his life. He was crystalline in his pure awareness that this moment, these next few seconds, would reform and reshape his life forever. There was now no option, no take-back, no do-over. The commitment from this moment on would be absolute and the decision he would make, permanent.

There were two of them, both armed with pistols. The taller had a flashlight and in its beam he saw what looked like a sleeping body in the bed. The silenced .22 snicked viciously as feathers flew up from the bed. It was just a bunch of pillows. The man suddenly felt trapped and dropped to a squat, pivoting on his heel, angry for having been fooled by a vulnerable gringo. He saw the slightly open door leading to the adjoining room and he charged through it.

As the door swung open, it hit another chair placed there in such a way as to fall over between the attacker and Tom. As the Tupamaro stumbled, Tom rose out of the armchair in one smooth motion and raised the silenced ASTRA Constable .380 in the stance of an Olympic target shooter and shot the guerrilla across the bed in the face, not five feet away. It was so automatic, so reflexive that Tom had no chance to be sick.

The man went down. Tom’s single bullet had gone through the assassin’s eye and buried itself in his brain.

The second man, hugely fat but immensely strong, emerged from out of the shadows and jumped over his fallen comrade, reaching for Tom, and knocking him out of his fugue state and onto his back. Again, Tom reacted without thinking and fired, twice. The Tupamaro dropped his weapon and clutched at his throat in vain. He landed on top of the bed, bleeding heavily from a neck wound, his carotid artery in shreds. Tom rolled him over and watched without emotion as the man on the bed bled out.

Tom quickly took stock of the situation and figured he had at least ten minutes before any back-up would come to see what had happened to the dead men. He dropped the blood-soaked pyjama bottom where he stood, closed the room door, propping the chair against the handle, and ran the shower. Three minutes to rinse off all the blood and douse the bath basin with the bottle of bleach that Jorgé had arranged for him. Tom dried himself carefully, dressed, and gathered up the thick plastic bag and elastic bands that had protected his gun when it was placed by Control in the bathroom cistern. He picked up the damp towels and left the room, stopping only to drop the towels down the hotel laundry chute in the service area.

Weapon in hand, Tom took the service stairs down three at a time, walked through the kitchen, and exited the hotel by the back door. Once in the alley, his sense of detachment kicked in and he stopped to evaluate himself. One side of him was flowing hot blood, like an enraged pit bull. The other side was giddy with an incalculable coolness.

They did not kill me.

There was a heavy grated sewer in the alley. Tom pulled the gun apart in fast, precise movements and dropped the pieces into the sewer, throwing the silencer into a garbage container behind the hotel. Perhaps it was the smell of putrid garbage coming from the container, or perhaps it was his fugue state finally breaking that unleashed his emotions. For whatever reason, Tom had barely a moment to prepare for the explosive and violent bout of vomiting that erupted from his deepest core and nearly knocked him off his feet. He heaved and coughed until he was literally empty and then staggered through the alley and took refuge in the Canadian Embassy across the street, where Walton and Jorgé were waiting.

If you are intrigued and impatient and want to read the book during the summer, soft-cover copies of Whitewash can be purchased at   Click here to purchase Whitewash

Next Story
The Loon

2 Responses to :
My Ninth Novel