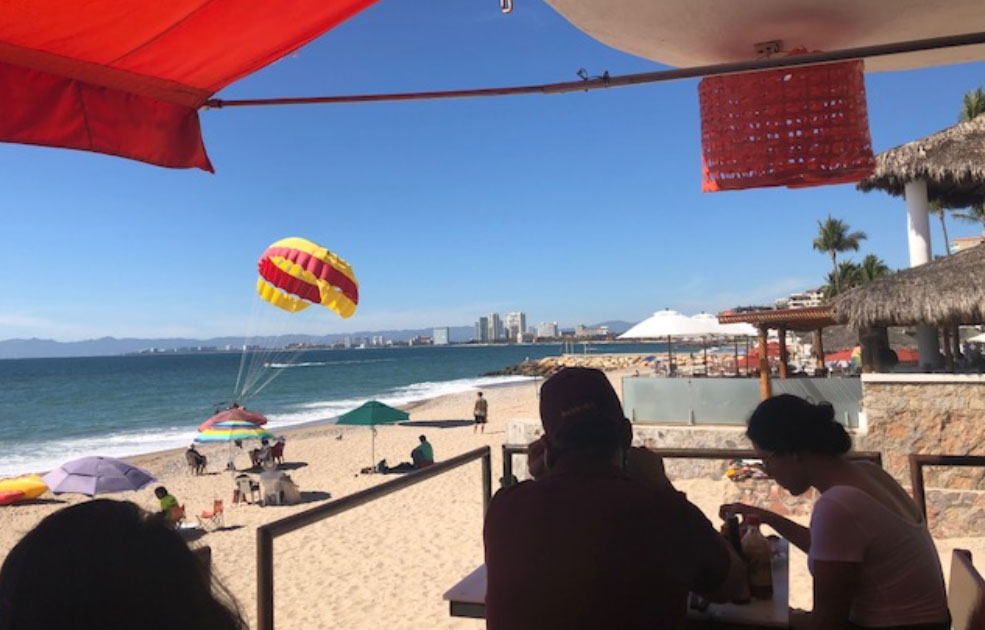 ‘El Barracuda’ is an excellent seafood restaurant on the beach just inside the northern limits of Puerto Vallarta’s so called ‘old town’ or Centro. Other than the very good and very reasonably priced food (and the Margaritas) its terrace is well-known for the view it offers of the beach stretching from the Centro toward Punta de Mita about 60 kilometers to the north.

Fifty years ago when I last visited Puerto Vallarta it was not unusual to see mules in the old town’s streets pulling carts of produce. 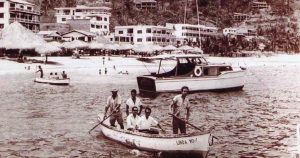 There ain’t no such things anymore except for a few forlorn horses and donkeys that trot up and down the beach with sun-seeking tourists on their backs pretending to be vaqueros (cowboys).

That is, when they are not up in the air paragliding.

Puerto Vallarta was originally called Las Peñas de Santa Maria (Las Peñas for short), and created as an answer to the need for a port capable of accommodating the larger ships that began replacing the small boats supplying the needs (salt, foodstuffs, clothing and machinery) of the mining towns in Jalisco State’s Banderas Bay area. The town prospered and was granted city status in 1886. It grew and slowly became a favorite vacation destination for the villagers living up and down the coast.

After World War Two there was a bit of a spurt in the town’s development when North American tourists began frequenting the place, but serious developers stayed away because of the loosey-goosey nature of the Mexican laws governing acquisition by foreigners of real-estate in littoral zones. 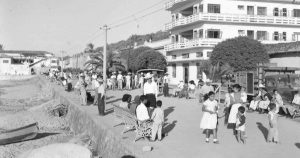 In the 1960’s the concept of Mexican Real Estate Trusts for Foreigners was developed and the real estate boom in Puerto Vallarta took off.

As a result, the immediate vicinity of the beach north and south of Puerto Vallarta’s ‘old town’ was transformed into something that looks like Miami Beach nowadays, complete with skyscrapers and waist-deep infinity pools – and, of course – hoards of North American tourists frying in the sun side by side in lounge chairs like sardines in a tin box.

You say: this is inevitable progress.

I say: this is skin-cancer farming.

Next Story
Fools in Paradise

One Response to :
Puerto Vallarta