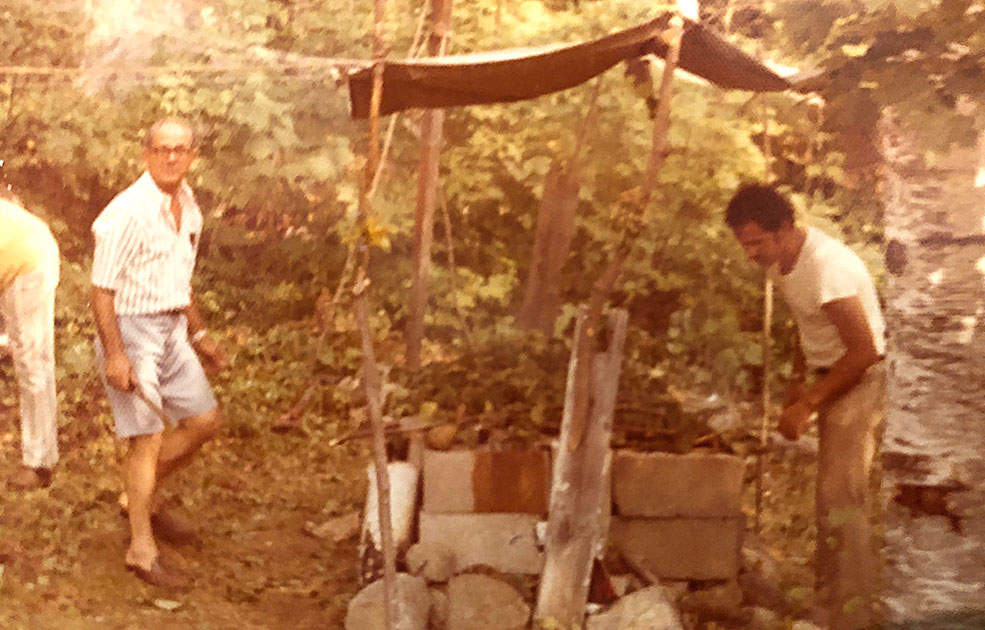 I fell in love with Lechon Asado – Cuban-style roast piglet – at a garden party hosted by Ramon at his finca in Pinar del Rio where Cuba’s finest tobacco grows.

Thereafter, wherever my travels took me I made it a point to test and taste lechon every time I saw an eatery that featured the dish on the menu. I was dying to discover a place where lechon tasted exactly like it had tasted at Ramon’s finca in 1959.

The years passed and I did not run into Ramon again before 1969, in – of all places – my home town, Montreal, the city to which he and his family had fled to get away from Castro.

I immediately invited him and his folks to spend a week-end at my country house so that I could talk him into helping me host a garden party featuring his kind of Cuban lechon.

He was all for it.

“There are three important things to remember about good lechon” he said. “First, the piglets must weigh between eighteen and twenty-two pounds. Second, you must split their backbones so that they can be completely flattened, and third, the marinade must have bite.”

We built a fire pit of cinder blocks, used an old mattress frame to support the pigs over the fire and planned to cover the meat while it was cooking with oven-proof, see-through SaranWrap. (Of course, in Cuba they use palm-fronds, but we were kinda short of those.)

Then we hit a snag: where to find two piglets about 18 to 20 pounds each to feed the forty or so hungry people we were planning to invite. The solution came from an unlikely source: my client, a Jewish fish monger, had the right contacts.

The Friday before the party Ramon and his family moved in with us for the week-end. They showed me how to mix coarse salt, pepper, oregano, cumin, cooking orange- and lemon-juice and a ton of garlic into a powerful liquid with which to marinate the gutted and flattened piglets overnight. (Luckily, I had a back porch where the marinated piglets could sleep in peace. Even so, the stench of garlic in the house remained overwhelming for days.)

Next morning, Ramon and I got up at five and started the day with a shot of rum, followed by strong, sweet Cuban coffee and a good cigar. Then we lit a charcoal fire in the pit. When the heat reached six hundred degrees Fahrenheit we placed the piglets over the fire skin down to make chicharrones – crackling. The heat was then reduced to one hundred and eighty degrees and we turned the piglets over, covered them with SaranWrap and let them cook for six hours.

We did this on every Saturday before Labour Day for twenty-three consecutive years. The menu was the same year after year: lechon, black beans and rice, salad and for desert, chocolate cake. For drinks we served ‘fortified’ (with cognac) Sangria and Cuban coffee.

In the twenty-fourth year Ramon and his family failed to show up. Panicked, I tried to contact them, but without success. Luckily, my son and an old friend of mine, Ed, were in town and they helped me save the day.

The following Tuesday I was finally able to reach Ramon. He told me that a car had hit his wife, Alma, as she was crossing the street on Friday morning and that she had suffered a very serious head injury.

Alma remained in a coma for three years, but Ramon never gave up on her. He went to see her in the hospital every day, massaged her hands and feet, talked to her and read books and newspaper articles to her as if she were fully functional.

Three years almost to the day after her accident Alma opened her eyes, and when she saw her husband sitting at her bedside said: “We’d better hurry. We don’t want to be late for Roberto’s pig party.”