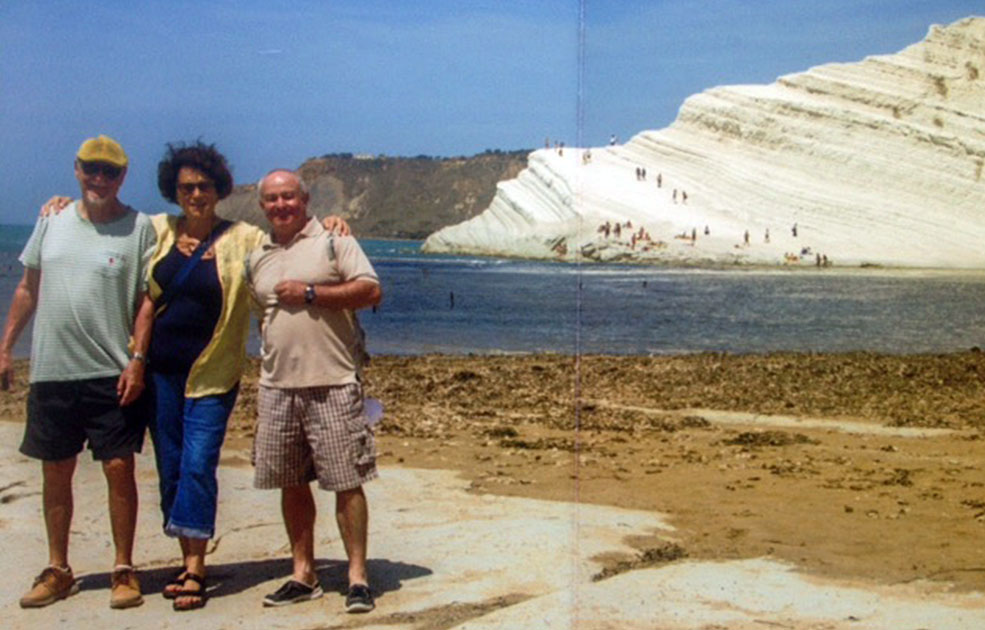 My Italian friends kept insisting that my family name – LANDORI – originated in the general area around the Torrente Landori, a small waterway in Sicily’s Agrigento Province. I found this hard to believe, so, a couple of months ago, I saddled up and flew Cattleclass (or, if you prefer, Sardine Seating) via Wizzair from Budapest to Catania to ‘do’ Sicily and to inspect the area whence my name supposedly came from.

I visited Taormina, then drove to Siracusa. From there I cut diagonally across the island to its westernmost point, the marvelous beaches  at San Vito lo Capo, where those who really know Sicily – the cognoscenti – hang out during their annual R and R.

Capo San Vito is not only famous for its beaches but also for the outstanding seafood served in its many eateries. Somebody recommended the Syrah Restaurant where, for the first time in my life,  I was treated to a Marsala after-dinner digestif that was over a hundred years old.

The best way to reach Erice, a must-visit town near Capo and the next stop on my itinerary, is via cable car. You leave your car in Trapani and then ‘fly up the wire’ 2,750 feet to this beautiful triangular-shaped medieval town that somehow managed to survive attacks by the Greeks, the Phoenicians, the Saracens, the Carthaginians, the Normans and the Turks.

Of course, sitting on top of a mountain almost a thousand meters high and strategically walled off must have helped.

From Trapani I headed south toward Agrigento (the capital city of the eponymous province) and, on the way, visited Mount Genuardo  where my insignificant namesake –  the creek called Torrente Landori – commences its fourteen-kilometer meandering south through hill and dale, ending its course by spilling into the Lago di Favara.

Along the way I searched for Landoris and found a few, among them an Olympic skate-boarder and a champion swimmer, but no blood relatives.

Agrigento teems with interesting sites: to start with, there are at least ten churches worth visiting in the city itself. Greco-Roman and Carthaginian ruins litter the countryside as do magnificent beaches, one of which, near Realmonte and called Majata Beach, offers the visitor not only a generous stretch of fine sand, but also access to the Turkish Steps (a gleaming white geological formation that looks like a gigantic stairway reaching from the sea toward the sky).

The answer to this question is simple: in ages past Turkish and Barbary Coast pirates often scaled the steps to sneak into the hinterland with a mind to plunder. The name stuck: Scala dei Turchi.

Sicily is an enchanting place with two serious drawbacks:

12 Responses to :
The Turkish Steps