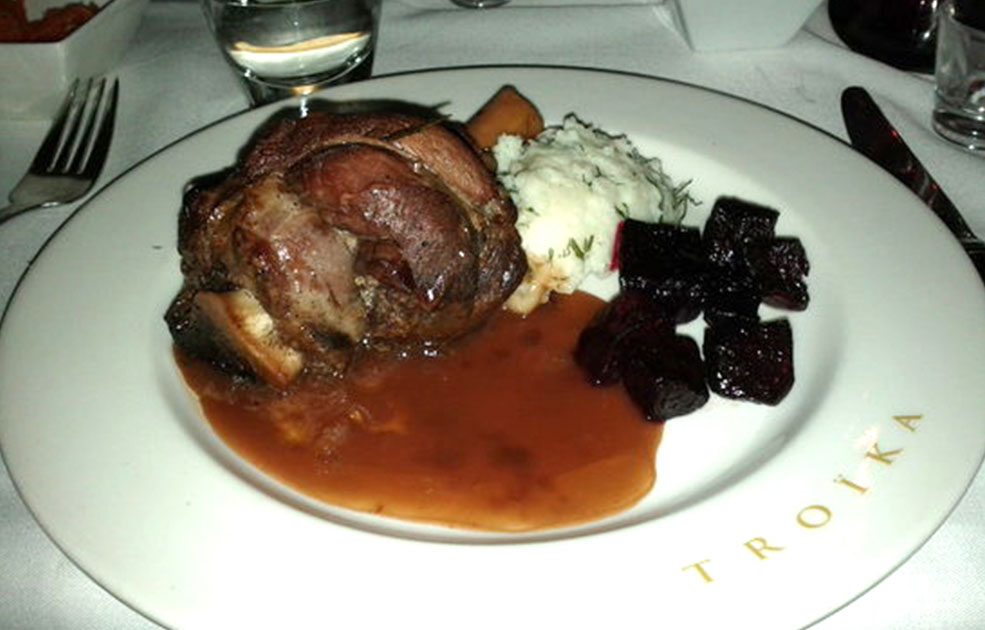 He was born in the town of Bialystok, Poland. The day the German Army invaded his country on September 1, 1939 he was visiting Warsaw. Instead of returning home, he enlisted in the Polish Army. They were happy to take him, principally because he spoke faultless German. (In those days most Polish Jews spoke Yiddish only and they mistook him for a goy.)

He was captured and sent to Siberia.

He somehow escaped the Gulag and found his way to the UK through Scandinavia in 1942, and enlisted in the Free Polish Army there.

He was sent to North Africa where his unit was homologated into the British Army and he became a tank commander.

He fought in the Libyan desert against German General Rommel, (the Desert Fox), and, after the British defeated the Germans near Tobruk, he was posted to the European Theatre of War.

In 1967, he and Voychik, a passionate wine collector, decided to create an upscale “Russian” restaurant on Crescent Street, the street Johnny Vago, the maniacal Hungarian promoter ‘formulated’ in his mind and turned into reality as the centre of FUN and good eating and drinking in Anglo-Montreal (Winston Churchill Pub, Friar Tuck’s – and, of course the flagship establishment of the “street”, Thursdays Restaurant and Bar, with its tunnel that conveniently lead, for amorous couples of means, to the Hotel de la Montagne on the street one over).

To finance the project they secured a loan from the friendly manager of a bank around the corner and rented the semi-basement space of an old building a block and a half up the hill. He found a third partner for the venture – also Polish – who helped dig out the rubble and enlarge the space, repair the brickwork of the walls and install the equipment provided by the restaurant equipment business. For decoration, they bought yards and yards of red brocade that they artfully draped over the old mirror-frames hung from the walls they had picked up for a song from pawnbrokers on Craig Street.

He had an old Russian musician friend whom he talked into playing sentimental Russian songs on opening night and, voila, MONTREAL’S LEGENDARY TROIKA RESTAURANT WAS BORN (click on URL below) with Sacha, the Russian violinist, a regular fixture.

He met and married a Lufthansa stewardess with whom he had two kids. He ran the Troika for over forty years and then sold it to an Egyptian who had little flair for promoting elegant restaurants.

He retired to his farm near Stowe in Vermont, contracted some sort of lung infection that was misdiagnosed by his doctors and died prematurely ten years ago.

He was one of the many unsung heroes of our times – a courageous, dedicated, adventurous non-quitter, and a loyal friend.

His name was Ted Lewkowski and I had the honour of being his friend during more than four decades.